To Earn Respect You Must Show Respect 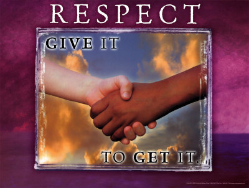 I recently posed this question on the Facebook Little Things Matter fan page:

“What are the things you notice about people that make you respect them?”

Reading the responses was interesting and when I compared the fans’ comments to my list, one common theme stood out. Everyone agrees that you earn respect by showing respect. Said another way, if you take the time to demonstrate respect for people, they will show you respect.

While there are other factors that influence your ability to gain respect, such as work ethic, personal character and attitude, one thing is for sure:

– if you don’t show people respect, it is unlikely they will respect you.

Let me share with you a few of the comments from the Little Things Matter Facebook fans. This is just a small sampling of responses I received.

Remember My Name—Jason respects a person who is intentional about remembering people’s names. I agree, Jason. When you remember a person’s name, you demonstrate sincere interest and respect.

Check out my post The Value of Remembering Names for my top tips about how to be more effective in remembering people’s names.

Be Consistent—Lonnie and Kelly said their respect for people grows when they are consistent. Kelly said she respects people who are consistent in their attitudes and business dealings. When she observes someone on top of the world one day and then portrays doom and gloom the next, she feels he or she has self-image issues. Kelly and Lonnie, I had never thought about this point before, but it does make sense. Thanks!

Be On Time—Dianne said she respects people who respect her time by being on time. Dianne, not only do I agree, but I strongly agree. When people are late, their actions indicate that they don’t respect your time. When I asked myself if I could truly respect someone who does not value my time, my answer is “NO!

For more on this topic, read or listen to The Importance of Being on Time.

What traits come to your mind when you think about people who are reliable and dependable?

No Gossiping—Debbie indicated that she respects those who don’t gossip. I would agree. It is hard to respect people who speak poorly of others behind their backs. If you find yourself engaging in gossip, try using some self-control and keep your comments to yourself. It’s hard to do but when you do it, you will be proud of yourself and your ability to gain respect will grow.

Greet People With a Firm Handshake and Look Into Their Eyes—Tiffany said, “For me it’s when I meet people for the first time and they look into my eyes and shake your hand.” I highlighted the words, “look into my eyes” for emphasis. Could this mean that Tiffany notices the people who look into her eyes with warmth, authenticity and a genuine interest in her? This is different than just simply making eye contact.

I am going to work on this small distinction when I greet people. Will you?

Be Real—Geoff said, “I respect people who have faced challenges, had bad days, but aren’t afraid to be open about their emotions – and still remain generally positive – I think that means they’re ‘real’.” I think the underlying message here is that Geoff respects people who are authentic and vulnerable. I agree 100%.

I agree there are times to be vulnerable, but I would also say there are times, when you should use discretion in who you open up with and in what you say.

Do Unto Others As You Would Want Them To Do Unto You—Linda referred to what’s known as the Golden Rule and said, “Treat people with the respect you would want to be shown.” Linda, thanks for being one of the people who influenced the theme of this lesson.

After spending hours in study on this lesson, I am convinced that showing respect to people is a little thing that directly influences people’s respect for you.

I want to thank the Little Things Matter Facebook fans for all your insights and contributions. You have given me new perspectives. Thanks for making my life better.

What are you going to do differently?

Being honest with yourself, on a scale of 1-10 how would you rank your ability to demonstrate respect? Do you show a genuine interest in others? Do you listen effectively? Do you value someone’s opinion, even if it’s different than yours?

While typing this lesson, I engaged in some self-evaluation. I must admit that I gave myself a 7—room for improvement. I am committed to making changes in this area, because I can do better. Will you join me?

A sure way to offend people and lose their respect is to be disrespectful.